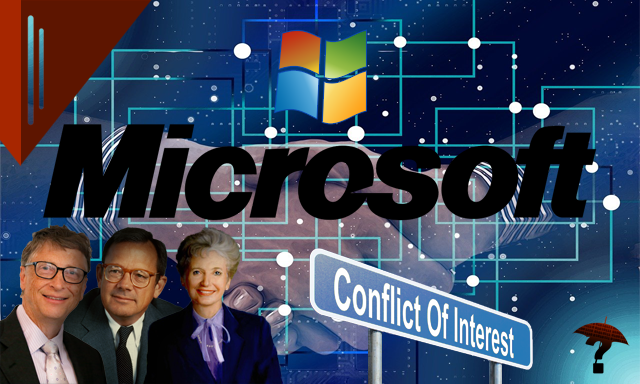 Bill Gate’s mother, Mary Maxwell Gates, was Chairwoman of United Way. Her father, was a wealthy banker, and her grandfather, was the President of the National City Bank, in Seattle; and was also the Director of the Seattle Branch of the Federal Reserve Bank. With a family bloodline like this, you can see, Bill Gates was not simply smart, or lucky; but rather, “destined for success”, as They say. 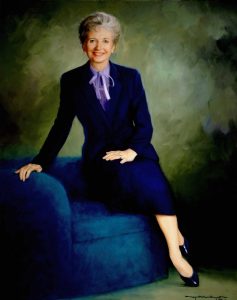 For example, most know the (highly improbable) origin story of how Bill Gates and Paul Allen rose to economic power. 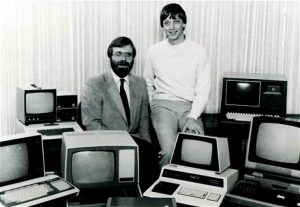 Tens of Microsoft documentaries have have come out, selling the same old idea to the public. That in 1975, Bill Gates and Paul Allen (barely out of their teens at the time — although Paul looks like he’s really around 40 for some strange reason), were just a couple of wily drop-out programmers, who managed to briskly walk into IBM (one of the largest corporations in the world at the time), immediately set up a meeting with IBM‘s CEO, John Opel, sell them a product (MS-DOS) that they did not even own at the time (after the deal, they allegedly bought a 86-DOS from Seattle Computer Parts for $50,000 to sell as their own)! Does that sound probable? 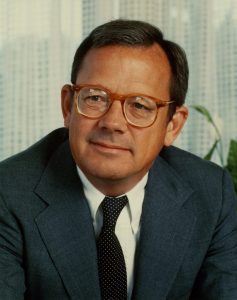 Then, they were able to go back an pull the proverbial wool over Opel’s eyes, in one of the most historical business deals ever made in the tech industry (as if Opel, the CEO of IBM, for that one meeting alone, decided to completely abandon all known standard business practices). That deal changed everything for both parties involved. IBM lost out, BIG TIME (ensuring Microsoft an 80%-90% share of the operating system market; and all the money that guaranteed for Microsoft, and the Gates family in the long run). For Microsoft, and the Gates family, it was only the beginning.

However, that origin story, is just that (a story), and couldn’t be further from the truth. For critical thinkers, and the curious alike, a few questions arise… Was Microsoft created as an IBM front company, to get around antitrust laws (operating as an external company, under IBM, getting around any antitrust lawsuits that IBM would have eventually faced, if they had themselves decided to corner the PC operating system market)? Why would John Opel, CEO of IBM at the time, essentially engage in a fraud against his own company? Could it be, that before John Opel become CEO of IBM, there was already a cozy connection between him and the Gates family? For his “help” during, and silence after the deal, did John Opel personally benefit from the deal, knowing full well, that the deal would undercut IBM as a company? If so, doesn’t that mean Microsoft was built on a conflict of interest; a fraud?

A Major Conflict of Interest

Well, let’s put it this way. There’s two people, I’m sure Bill Gates would rather not talk about; the first person, is John Opel, and the second person is his mother, Mary Maxwell. Why his mother? Because, she was actually the golden link in the Microsoft deal; if Mary Maxwell did not get involved, Microsoft would not exist today. The quotes below, will prove beyond a shadow of a doubt, that the origin story of Microsoft, is at the very least, an absolute lie.

She was the first female president of King County’s United Way, the first woman to chair the national United Way’s executive committee where she served most notably with IBM‘s CEO, John Opel, and the first woman on the First Interstate Bank of Washington’s board of directors. Her son Bill Gates is a co-founder of Microsoft.” https://en.wikipedia.org/wiki/Mary_Maxwell_Gates

In a small way…in fact, maybe in a BIG WAY…Bill Gates can thank his mother for one of the initial connections that got him going.

In 1980, IBM launched its top-secret program, Project Chess, to develop its own PC. It need an operating system. IBM sent a team to Redmond, Washington to help on Project Chess. After two meetings held under promises of confidentiality, IBM offered a hardware and software consulting deal to the the fledgling company. IBM wanted the rights to a desktop operating system for a small sum. Bill Gates was willing to oblige…on condition that he be given rights to sell copies to other computer makers for whatever the traffic would bear.

Why did IBM even go to Redmond, WA in the first place? At the time, IBM president John Opel served on United Way‘s national board…as did Mrs. Gates. In 1980, when someone mentioned Microsoft to John Opel, he responded, “Oh, that’s run by Bill Gates, Mary Gates’ son.” Behind the scenes, Mary Gates had spoken with John Opel about the new breed of small companies in the computer industry, which she felt were under-appreciated competitors of the larger firms with which IBM traditionally partnered.

It is interesting to note that Bill Gates, and his Microsoft colleagues, were not the pioneers of the first operating system for personal computers. Nearly ten years before Bill Gates signed the epochal deal with IBM, Gary Kildall, a computer science professor had developed his own system…the Control Program for Microcomputers.

Kildall and Gates had known each other from their years…freely sharing ideas in the Home Brew Computer Club, a group that Kildall had founded. Why IBM connected with Bill Gates, and not Kildall, is not widely known. However, one can speculate that Mary Gates’ connection to IBM‘s John Opel played an important, if not critical, role.” https://prospectingprofessor.blogs.com/prospecting_professor/2005/12/bills_billions_.html

“Mary Gates, a prominent Seattle businesswoman who helped her son, William H. Gates 3d, get the contract that led to a lucrative relationship with I.B.M. for his fledgling Microsoft Corporation, died at her home early today.” https://www.nytimes.com/1994/06/11/obituaries/mary-gates-64-helped-her-son-start-microsoft.html

“… it was Opel who met with Bill Gates, CEO of the then-small software firm Microsoft, to discuss the possibility of using Microsoft PC-DOS OS for IBM‘s about-to-be-released PC. Opel set up the meeting at the request of Gates’ mother, Mary Maxwell Gates. The two had both served on the National United Way‘s executive committee.

As CEO, Opel was also able to resolve an ongoing antitrust lawsuit with the U.S. Justice Department, which allowed the company to grow more rapidly.” https://www.pcworld.com/article/243311/former_ibm_ceo_john_opel_dies.html

So you see, Bill Gates is not just some smart nerd, who got lucky. He actually grew up in an extremely powerful and privileged family. In reality, Bill’s billions did not come from his ability to code and “outsmart” his competitors, but from family connections (nepotism) and outright corruption. It’s that simple; Bill Gates comes from a very elitist family of die-hard eugenicists and cut-throat bankers, masquerading as humanitarians and philanthropists.

IBM and the Nazis

Is it really a wonder though, that IBM made the deal with a eugenicist-supporting family? Let us not forget, that IBM is the very same company that (literally) made the punch cards for the Nazi death camp possible.

Edwin Black, in his book, IBM and the Holocaust: The Strategic Alliance between Nazi Germany and America’s Most Powerful Corporation, quoted Leon Krzemieniecki, the only man still living, who worked in the Hollerith Department (named after Herman Hollerith, the inventor the infamous ‘electromechanical tabulating machine‘ used by the Nazis, and founder the company that later became IBM), which could be found at Auschwitz (and all Nazi camps). This is what Krzemieniecki said… “I knew they were not German machines,” recalled Krzemieniecki. “The labels were in English. The person maintaining and repairing the machines spread the diagrams out sometimes. The language of the diagrams of those machines was only in English. I asked Krzemieniecki if the machine logo plates were in German, Polish or English. He answered “English. It said Business Machines.” I asked, “Do you mean, International Business Machines?” Krzemieniecki replied, “No, Watson Business Machines.”” https://www.sfgate.com/opinion/article/The-business-of-making-the-trains-to-Auschwitz-2821685.php

What should really make you wonder is, what are the real long-term goals of these two mega corporations? Is it just about the money, or is there something more diabolical being prepared for the future of humanity (perhaps, a one world government ruled by corporatist internationalist technocrats, obsessed with conducting modern era eugenics experiments, and mass depopulation of the planet)? Clearly, there’s something very evil going on. Let’s not forget, that in his 2015 TED Talk, Bill Gates was very clear and open about intentions to depopulate the world by 15% with vaccines (that’s literally eugenics).

It’s all out in the open nowadays. They are not even trying to hide their plans for humanity anymore; as They did in the past. 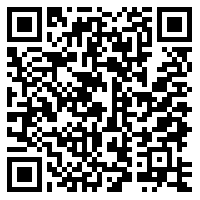