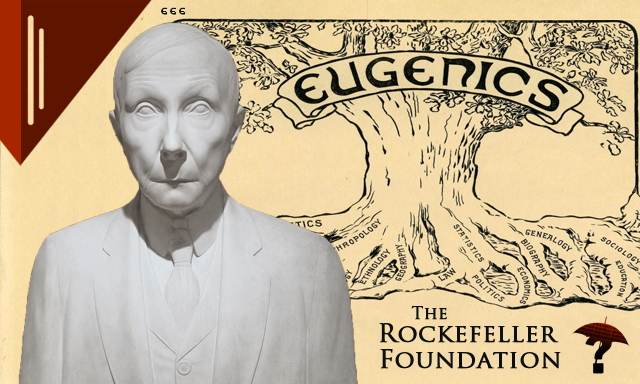 When most people think of eugenics, they think of racial engineering, the Nazis, and their “Lebensborn” (Aryan Übermensch, Overman, or Superman) program, meant to root out, by mass extermination, all “inferior races”, and eventually, end up with a purely Nordic race; but what most forget, is that the first documented Country to openly promote, and force race laws upon it’s people, was actually America, in 1908. In 1933, when Hitler came to power in Germany, the Nazi Party was able to utilize state-sponsored propaganda to sway the German people into supporting the validity of eugenics (a mass depopulation plan, masquerading as race science), and all of the barbaric race laws that came along with the notion; but who, in the year 1908, held enough power in America to bring about such a nightmare? Who was able to sway the American people into accepting similar “racial hygiene” (eugenics) laws, decades before they were attempted in Germany, by the Nazis? The answer is the Rockefeller Foundation (founded in 1913). Most know the Rockefeller family as the Kings of “Big Oil”, but what most don’t know, is that they also set the stage for “Big Pharma” as well (all the while, destroying the best natural medicines and cures in the process).

In 1975, CONGRESSMAN LARRY P. MCDONALD, said the following words about the Rockefellers; “The drive of the Rockefellers and their allies is to create a one-world government combining super-capitalism and Communism under the same tent, all under their control…. Do I mean conspiracy? Yes I do. I am convinced there is such a plot, international in scope, generations old in planning, and incredibly evil in intent.”

According to Edwin Black of Cleveland Jewish News, “More than 27 [to be exact, by 1936, 35] states joined the shameful, decades-long utopian campaign to medically engineer racial supremacy.”

“Their eventual goal was to eliminate as much as 90% of the population from the reproductive future of America.”

“The preferred methods were gas chambers and other forms of euthanasia. The first public euthanasia legislation was introduced into the Ohio legislature in 1908. That measure was unsuccessful, as were other death panel bills. The next best thing was forced surgical sterilization under specific state authority. This policy in many states was validated as the law of the land in the U.S. Supreme Court by one of America’s most stellar jurists, Oliver Wendell Holmes. In 1927, Holmes ruled on an obviously collusive lawsuit seeking to justify the forced sterilization of Carrie Buck, her mother, and her healthy daughter.”

“It is better for all the world,” Justice Holmes infamously wrote, “if instead of waiting to execute degenerate offspring for crime or to let them starve for their imbecility, society can prevent those who are manifestly unfit from continuing their kind … Three generations of imbeciles are enough.”

“… North Carolina, however, continued its eugenic practices for years, with race laws purportedly deployed to eliminate poverty. From 1946 to 1968, an estimated 7,600 additional North Carolinians were sterilized, mainly poor blacks. Now, the state of North Carolina, under the weight of a multi-billion dollar deficit and a rising black political power base, is struggling to augment its official apology with financial compensation.” https://www.clevelandjewishnews.com/archives/can-you-write-a-check-for-genocide/article_5e882b98-ab38-5bfb-bcbf-bbab1f64e0c3.html 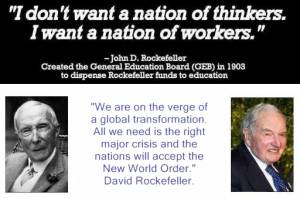 You can find similar information concerning the Rockefeller’ and their obsession with eugenics, here: https://historynewsnetwork.org/article/1796 (The Horrifying American Roots of Nazi Eugenics)

Also, here’s a few infamous David Rockefeller Sr. Quotes: “Whatever the price of the Chinese Revolution, it has obviously succeeded not only in producing more efficient and dedicated administration, but also in fostering high morale and community of purpose. The social experiment in China under Chairman Mao’s leadership is one of the most important and successful in human history.”

“We are grateful to The Washington Post, The New York Times, Time magazine and other great publications whose directors have attended our meetings and respected their promises of discretion for almost forty years. … It would have been impossible for us to develop our plan for the world if we had been subject to the bright lights of publicity during those years. But, the world is now much more sophisticated and prepared to march towards a world government. The supranational sovereignty of an intellectual elite and world bankers is surely preferable to the national auto-determination practiced in past centuries.”

“All we need is the right major crisis and the nations will accept the New World Order.”

I will conclude this article with another infamous eugenics quote from Henry Kissinger (Foreign Policy Adviser to Nelson A. Rockefeller, older brother of David Rockefeller),… “Depopulation should be the highest priority of foreign policy towards the third world, because the US economy will require large and increasing amounts of minerals from abroad, especially from less developed countries.”